Is the black, gaping maw of the “smiling sun” adorable, unnerving, or both? Either way, one thing is for sure: The cheesy, jack-o-lantern-like face tweeted by NASA Sun and Space last month isn’t exactly an innocent grin. The image, which is depicted in ultraviolet radiation, actually shows what is known as “coronal holes,” beams of electrically-charged solar wind that “can cause severe disruptions to the atmosphere of Earth,” according to University of California physics professor Brian Keating.

Each eye and the mouth of the sun’s “smile” are patches of the star’s outer layer that have cooled by a few hundred degrees, Keating said in an interview with The Washington Post. Please don’t stare at the sun, though, because it won’t smile back — the patches, captured by the satellite on the UV spectrum, aren’t visible to the human naked eye.

So what do a few sections of slightly cooled, slightly-less-dense gas mean for Earth-dwellers?

When the gusts of wind hit our planet’s atmosphere, they can cause beautiful auroras as the sun’s particles and Earth’s gases intertwine — but they also have the potential to be incredibly disruptive to telecommunications. It would take a significant amount of electrically-charged particles from the sun’s offshoots to reach Earth, but enough exposure could be read by antennae and interrupt television, radio, and other forms of communication, per Keating. In a severe scenario, the solar wind blast could impact electrical grids, leading to power outages. 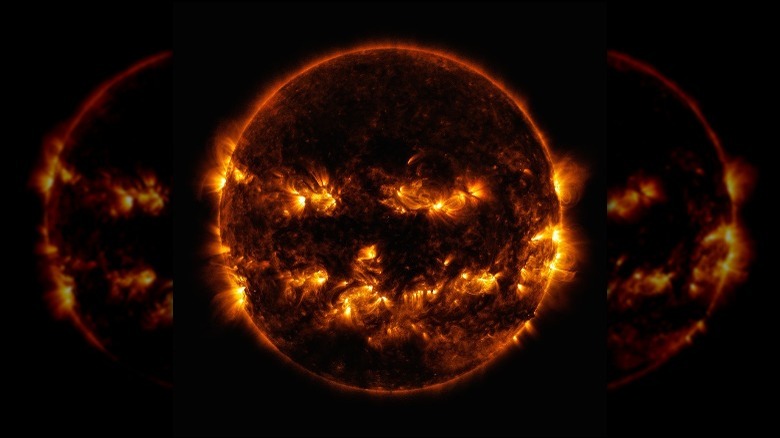 Spooky personification of the sun’s surface is not entirely unusual. In 2014, NASA’s Solar Dynamics Observatory captured an image of solar activity creating the surface appearance of a jack-o-lantern, dubbed “Pumpkin Sun.” Despite the seeming regularity of these events, a coronal hole (or geomagnetic) storm of serious proportions is “long overdue,” Keating told The Post. In 1859, a solid geomagnetic event originating from the sun known as “The Carrington Event” set fire to multiple telegraph stations.

Such storms could be occurring as frequently as every year, but Keating says the Earth has “dodged all these magnetic bullets for so long.” With our dependence on technology-based communications, a significant coronal hole blast could come with some hefty consequences. Geomagnetic storms are ranked on a five-level severity scale by the National Oceanic and Atmospheric administration’s Space Weather Prediction Center.

The “Smiling Sun” event was ranked as a G1. An “extreme” geomagnetic storm, or a G5, would set off a number of systemic problems — sweeping power outages, grid collapse, spacecraft damage, a radio blackout lasting a couple of days, interrupted satellite navigation, and visible aurora as far south as Florida and southern Texas,(via NOAA). NOAA’s predicted frequency of a G5 storm is unsettling — four per every 11 years. But as Keating explained, Earth has been lucky for a few centuries. If or when our luck runs out, Keating says, “it could be really scary, and the consequences could be much more dramatic.”

NASA Finds An Astonishing Fact About This Asteroid...

Believe it or not: Male mice hate bananas....

Modeling suggests loss of biocrusts by 2070 could...