We don’t often compare Galaxy smartphones with other brands but today we’re going to make an exception, for science, or more realistically for the purpose of history and entertainment. ‘History’ because the two devices in question carry the Samsung and LG brands, and ‘entertainment’ because there should be some inherent entertainment value in juxtaposing Samsung’s most powerful foldable to date, the Galaxy Z Fold 2, with one of the most unusual smartphones that have been created by its neighboring rival LG, i.e., the LG Wing 5G.

In case you didn’t know, LG unveiled a dual-screen smartphone recently called the Wing 5G. It looks unassuming but conceals a unique design. It has a swiveling display that can be rotated to 90 degrees in landscape mode to reveal a smaller, secondary display underneath. 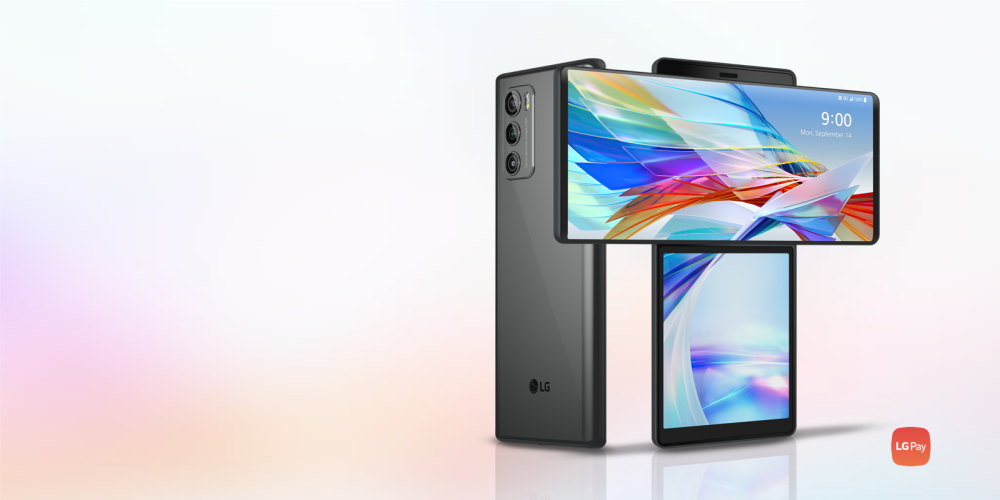 Even though the LG Wing 5G is not a foldable device and it’s conceptually different from the Galaxy Z Fold 2, you could say it might owe its existence to Samsung’s foldable device. Without Samsung’s bold approach to kickstarting a design revolution for the mobile industry, perhaps LG wouldn’t have been pressed to create this device and fans of the brand would have missed out.

What followed for LG was a sequel, the G Flex 2, in Q1 2015, before the company abandoned its plans for foldable phones. Meanwhile, Samsung continued pursuing its ambitions and we all know what followed. The technology that had been used in the Galaxy Round was repurposed to become the company’s edge display, and later the Galaxy Fold became the first smartphone/tablet hybrid to carry an actual foldable panel.

The LG Wing 5G may not be a spiritual successor to the G Flex 2 the same way the Galaxy Z Fold 2 is to the Galaxy Round, but it raises the question of how the present would’ve looked like if LG kept pursuing foldable display technology? The LG Wing 5G probably wouldn’t exit, so you could say that the phone is the result of LG’s decision to abandon the segment as much as the Galaxy Z Fold 2 is the outcome of Samsung’s continuous efforts in this area.

So how do they actually compare given their different heritage and the fact that they have little in common spec/design/price-wise?

At first glance the LG Wing 5G looks like the type of high-end smartphone you would expect buying in 2020. It has a full-screen design, an in-display fingerprint scanner, a prominent triple camera setup, a metal frame, and a glass back panel. But the lack of a display notch or a selfie camera cutout is the first clue hinting that there’s more than meets the eye. This is because the phone has a motorized pop-up selfie camera.

Of course, the pop-up camera is not the LG Wing 5G’s only moving component. The entire 6.8-inch P-OLED display rotates to the side, revealing a smaller 3.9-inch secondary OLED screen. The main panel has a resolution of 2460 by 1080 pixels whereas the secondary screen has a pixel count of 1240 by 1080. Both support a refresh rate of 60Hz.

Samsung’s Galaxy Z Fold 2 needs no introduction at this point but we’ll give it one for the sake of consistency. Samsung’s foldable phone may look like a somewhat elongated candy-bar smartphone from afar – and that’s because it has an odd aspect ratio – but you don’t have to spend a lot of time up-close with the Galaxy Z Fold 2 before you realize it’s highly unusual. 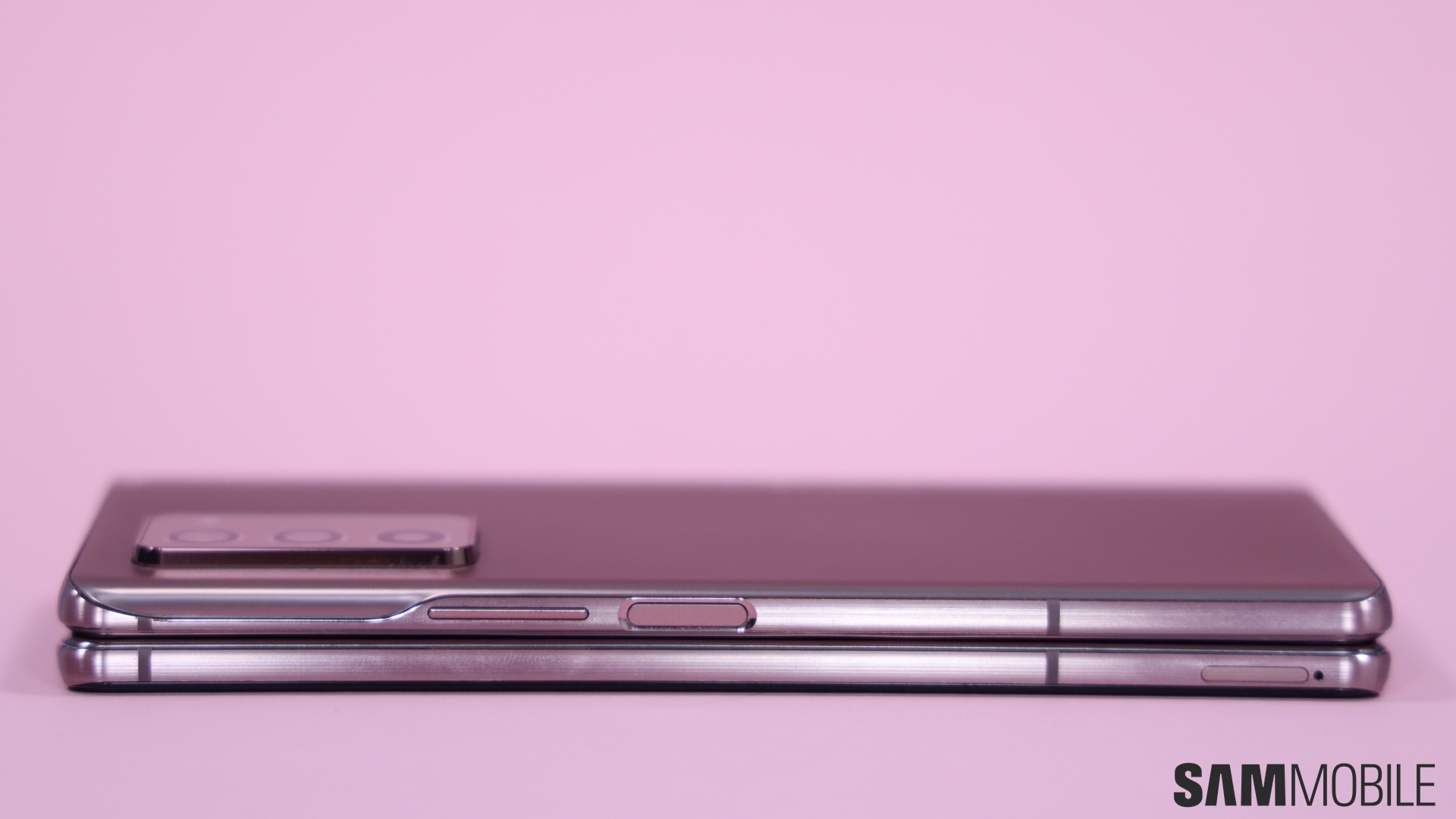 The Galaxy Z Fold 2 has a book-like design made possible by a very complex hinge. It can be used like a regular smartphone when folded, but unfold it and you will experience it through a whole different perspective; that of a tablet.

Samsung’s ultra high-end phone is equipped with a 6.23-inch Super AMOLED cover display and a 7.6-inch Foldable Dynamic AMOLED 2X display. The former has a resolution of 2260 x 816 and a 60Hz refresh rate, while the latter has a pixel count of 2208 x 1768 and a refresh rate of 120Hz. The device has a side-mounted fingerprint scanner.

How the form factors mold the user experience

We should point out that we haven’t spent any time with the LG Wing 5G. It’s not a Samsung device, but even so, it’s not yet available for purchase. Therefore we can’t speak from experience about how it feels using the phone, but we can look at the marketing material and take a guess on how this unusual form factor can mold the user experience.

The first thing that comes to mind is that, similar to Samsung’s Flex Mode, the swiveling display can be used as a camera viewfinder when capturing photos and recording videos, while the secondary screen can accommodate all the camera controls. The form factor could also work very nicely with mobile or emulated games for the same reasons.

As for the Galaxy Z Fold 2, there are two modes of operation and they don’t overlap as much. The device can be used as a regular smartphone through the cover display, or as a tablet when unfolded to reveal the foldable screen. The hinge allows for Flex Mode which is a clever way to deliver dual-screen controls when the phone isn’t unfolded all the way through, although the mode is supported only by certain apps.

As we pointed out in our Galaxy Z Fold 2 review, it delivers an incredible multitasking experience thanks to its ability to run three apps simultaneously on the same screen, and the cover display can act as a preview window when capturing selfies or group photos with the rear-facing triple camera.

Their unique design and user experience aside, there’s no way around the fact that the Galaxy Z Fold 2 is in another class as far as specifications go. Then again, it is a lot more expensive and costs twice as much as the LG Wing 5G. It’s not a fair fight, so let’s consider it a friendly match.

The LG Wing 5G is equipped with a triple camera combo comprising a 64MP wide-angle shooter with PDAF and OIS, a 13MP ultra-wide sensor, and a 12MP shooter that also appears to have an ultra-wide lens. The motorized pop-up selfie camera has a resolution of 32MP.

The Galaxy Z Fold 2 also has a triple camera setup but it consists of a 12MP wide-angle shooter, a 12MP ultra-wide, and a 12MP telephoto sensor. In addition, the phone has two identical 10MP selfie cameras, one for each Infinity-O display.

Finally, one advantage the LG Wing 5G has over the Galaxy Z Fold 2 is the microSD card slot. The other is its IP54 splash-proof rating.

Swiveling and folding their way to the final round

The obvious conclusion here is that these phones are nothing alike, aside from the fact that they have dual screens and follow an ambitious vision. But the takeaway, in our view, is that the smartphone market is much more interesting than it used to be, to the point where we can look at different form factors and how they can change the user experience. If the Galaxy Z Fold 2 can be its own tripod then the LG Wing 5G’s design acts a bit like a handheld gimbal/selfie stick.

Even if the Galaxy Z Fold 2 is a clear winner spec-wise, and even if LG had given up on foldable phones/tablets a long time ago, the LG Wing 5G is closer to being a Galaxy Z Fold 2 rival than most other smartphones on the market, thanks to its boldness and unique design. That’s commendable and perhaps even somewhat nostalgic considering the history of Samsung and LG.

‘Don’t let it dominate you’ Trump says: US Election news

This is all the data WhatsApp will soon...

Apple is developing its own modem for future...

MIT and Microsoft build a new algorithm to...

5 online tips for keeping in touch with...