Nine weeks after football was suspended in all of Europe’s major leagues, the Bundesliga’s back this weekend, blazing the trail for the others in trying to exist in the time of COVID-19.

Will they be successful? For everyone involved and all those watching, let’s hope so!

Obviously, we’ll be watching, too. There’s nothing else on! (And the BuLi certainly recognize this as well, and will be hoping to cash in with some new fans, even as none can actually attend the games — and probably for the foreseeable future as in all professional sports.)

Unlike other leagues set to restart later, the Bundesliga aren’t planning on cramming all games into an exceedingly tight window, so the plan is to mostly play just on the weekends. There will be six games today (Saturday), two more tomorrow, and one on Monday night as well.

In the UK, all games will be shown by BT Sport, while in the US, the games will be on various FOX Sports properties, though some only on the more esoteric ones like FS2, Fox Soccer Plus, or Fox Soccer Match Pass. FuboTV will carry the games as well, and we have an affiliate link you can use to sign up if you wish to support the blog. In other countries and territories, you can find broadcast and legal streaming information over on LiveSoccerTV.

The pick of the early games (14.30 BST / 9.30am EDT) is undoubtedly the massive Revierderby between Borussia Dortmund (The Jadon Sancho and Håland Show) and Schalke 04. The former still have a shot at the title while the latter are clinging on to the last Europa League place at the moment, so that adds an extra bit of spice amidst all this other novelty and weirdness going on.

Saturday’s late game (17.30 BST / 12:30pm EDT) is between Eintracht Frankfurt, who have fallen off hard after last season’s Europa League semifinal run, and Borussia Mönchengladbach, who are well in the top-four discussion.

With the action set to get underway again this weekend, here’s a quick primer on where we left off 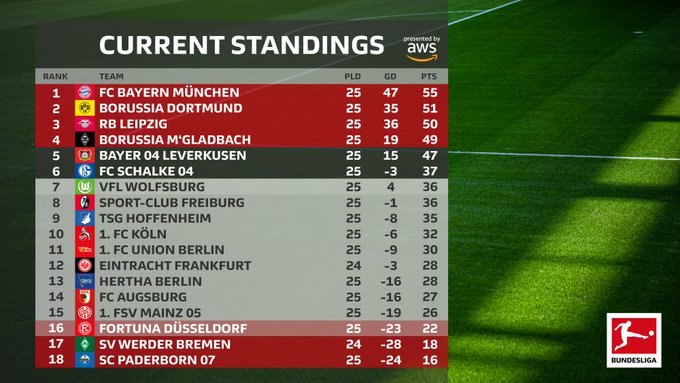 251 people are talking about this
Source: https://weaintgotnohistory.sbnation.com/2020/5/16/21260832/footballs-back-bundesliga-viewing-guide